Jacob tried something completely new to catch a dangerous abuser in a recent case in the Dominican Republic.

Destiny Rescue’s rescue agents normally go undercover, run surveillance or interview travellers at a border to rescue exploited children, but occasionally they must get creative or, in this case, musical.

Jacob, a 26-year-old agent in the Dominican Republic, pretended to be a famous rap artist to catch a dangerous pedophile who had kidnapped a teen girl in the country – an unprecedented and “awesome” tactic that he pulled off too.

I didn’t believe it was going to work.”

Finding the villain
While millions of tourists were dipping their feet in dreamy beaches and sipping on coffee at boutique cafes in the Domincan Republic, Jacob was handed a police case early last month about a 34-year-old male pedophile called Caden.

Caden was wanted for kidnapping a 14-year-old girl in the country and sending a video to her father, threatening him not to go to the police to retrieve his daughter. In the video, Caden, who was shirtless, had tattoos on his face, black-painted nails and gold rings, is seen slowly putting bullets in a revolver pistol, saying he will “kill the father,” Jacob said. 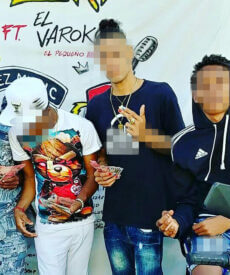 Caden, Jacob added, was also living in a “very dangerous” neighbourhood where if a resident “sees a car of someone they don’t know in their area, they can attack and rob you.” This meant it would be near-impossible to safely scour the area to find him.

“I knew it was going to be very difficult to catch this guy,” Jacob said.

But after asking the police more questions about the case, Jacob found out Caden (pictured center, in dark t-shirt) was also an amatuer rap artist – a detail that sparked a lightbulb moment. Jacob decided to pretend to be a fellow rapper who was keen to collaborate with Caden and meet in person, at which point he would then be arrested.

The fake rapper
Jacob began curating a fake identity by grabbing online images and music videos of a real semi-famous rap artist from Haiti, a neighbouring country to the Domincan Republic. “I’ve never been a star in my life and I was a star for like two days,” Jacob said.

Under this disguise, Jacob, who spoke with a thick Haitian accent, called Caden to ask about producing a song together. This was a daunting part of the plan, Jacob said. “Would he believe everything I would say?”. Caden, however, took the bait and was interested.

Jacob began building his trust by calling and messaging him and sending him photos and music videos from the online account Jacob was forging – also known as catfishing. “I was like, ‘yeah that’s my song’,” Jacob said. Asked if he was worried about having to spontaneously rap during a call, Jacob said he wasn’t fazed because he can “do a little bit”.

Thinking on your feet
On February 6, Jacob planned to meet Caden at a car park outside a shopping mall in the evening under the pretense of paying him $160 to feature in a new song together. Leading up to this moment, Caden was still suspicious about Jacob and called him “every five seconds”.

In one “scary” instance, Caden video called Jacob who, in a heartbeat, turned off his phone’s internet so it looked like there was a mere connection issue rather than an avoided call. In a second instance, Jacob told him he was bringing two friends. Caden then asked him to send a photo to prove it. Sitting next to a team of police officers, Jacob was stumped before quickly sending him a photo he found of his cover identity alongside two friends.

That’s when he believed I was real.”

The big surprise
Later in the afternoon, while ten police officers covertly surrounded the car park, Jacob and a colleague arrived and parked next to Caden. “I was freaking out a little bit … I knew he had a gun. I didn’t want anything crazy to happen,” Jacob said.

Jacob wound down his window and heard Caden screaming “what you doing?” before the police officers pounced and arrested him. Realising he got duped, Caden told Jacob “that was really intelligent – my respect”. 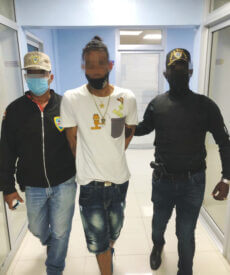 “Yes, it was,” Jacob recalled thinking.

In an “unexpected” twist in the plan, Caden also brought the minor to the car park, allowing Jacob and his team to “get them both in just one shot,” Jacob said.

Caden is now in jail awaiting his court hearing in May. As for the survivor, we learned she was manipulated, by way of drugs and alcohol, to think she was in a relationship with Caden. Evident by the fact she was upset when he got arrested, Jacob said “he convinced her he was the right person for her.” Since then, however, she has been to a psychologist, which was organised by the country’s government, and is now reunited with her family.

Destiny Rescue’s agents played key roles in operations that rescued more than 100 women and girls in the Dominican Republic last year and are continuing to restore lives to freedom this year too. Plus, Jacob said his creative approach has already been adopted by police in the country, saying it makes rescue work “easier”.

Names have been changed to protect identities.