Operation Cattleya: Over 70 rescued in the Dominican Republic

The stakes were high, and the problem kept growing, but finally, the time was right for agents to act.

“It started when we received some information from the police department.”

Destiny Rescue agents in the Dominican Republic have worked hard to develop a unique, mutually-beneficial relationship with local law enforcement. Our agents, including brave undercover operatives, former police officers, and even a licensed psychologist, have done more than just prove to police that they can be trusted–they’ve become valuable assets to law enforcement.

When the Specialised Prosecutor’s Office against the Smuggling of Migrants and Trafficking in Persons (PETT) received intel that a trafficker might be operating in one of their larger cities, they brought our agents onto the case without hesitation.

“We decided to go there and check it out…then we were planning to have the raid right away,” Destiny Rescue agent Jacob said.

What started as a routine, two-night surveillance project grew into a nine-month operation.

Jacob was stunned at how much the case expanded. “… Every time we moved forward, we kept getting more information [about] more girls being trafficked and more perpetrators involved in this case, so we had to keep investigating until we were able to close it,” he said.

The deeper they went, the more they found–it was like pulling up a root that keeps branching.

Even with solid intel on a few trafficking cells, agents and law enforcement were hesitant to spring the trap prematurely for fear that the other cells would go into hiding, taking their victims with them. As the complexities of this rescue operation became more evident, it was eventually named “Cattleya” after a delicate South American Orchid–freeing all the girls and young women would require subtlety and discretion.

As new perpetrators or locations were discovered, PETT sent our agents on additional undercover intelligence-gathering missions.

“[We would] spend a couple days staying at the same hotel where they were keeping the girls,” Jacob said.

Our agents observed many victims being sent away with customers at all hours of the night.

He and his partner needed to blend in and gather information, sometimes directly from the victims themselves. “We had to be friends with the security who work at the hotel…sometimes we would also go to the disco or club where they take the girls,” Jacob said, describing the various assignments involved in the operation.

The team worked tirelessly to expose all the information they could—one of our courageous female agents tracked one of the lead traffickers all night until he returned to his home at 6 a.m. Because of her dedication, we discovered yet another location holding captives.

A break in the case

The case took a dramatic turn in mid-January when two young women walked into a law enforcement office and reported they had escaped being trafficked. In an interview with one of our female agents and prosecutors from the anti-trafficking unit, one of the women outlined her harrowing story.

Back in her home country of Colombia, an “employer” offered her a service industry job if she moved to the Dominican Republic. Eager to escape the economic hardships of her home, she jumped at the chance for legitimate, well-paying work.

After landing in the Dominican Republic, she was brought directly to an apartment and told she’d incurred an enormous debt due to the traffickers’ “services” and was now in the “escort” business. Her employers instilled tremendous fear by handcuffing her and setting a gun on the table, posing a clear threat: obey or be killed.

She and other victims were then drugged and taken to hotels where they were forced into sex work and made to take five or six “clients” a day. They were given a small percentage of their earnings to pay back their faux debts—debts the traffickers periodically increased without cause.

One day, the young woman decided to act. Our agent reported that “instead of taking her drugs, [she] hid them and later put them in the drink of one of the guards.” The guard passed out, and this brave girl escaped, bringing along another captive.

During her interview, she mentioned the name of a hotel connected to the Cattleya investigation. In that instant, the case took another turn as agents realized this wasn’t an isolated incident but another piece of the growing Cattleya case.

Thanks to her inside information, agents uncovered a vast, well-organized human trafficking ring that distributed girls and young women throughout the country like goods.

Our team worked on more investigations, eager to rescue the other victims still being exploited by this network of traffickers. But their continued efforts seemed only to postpone potential raid dates.

“It just kept getting bigger and bigger, and there were just more and more locations that were part of this network,” Lucas, our project leader, noted.

Destiny Rescue and law enforcement leaders shared a mission, but their goals were unique. As a judicial office, PETT prioritizes prosecutions and wants to see perpetrators taken off the streets. Each investigation helped build an air-tight case to ensure convicted criminals were held accountable for their actions.

While our agents agreed that the perpetrators must be stopped, Destiny Rescue’s primary goal is rescuing. Continuing to postpone rescue with the knowledge that girls and young women were being abused daily was heartbreaking.

There were moments when we were questioning whether or not it was going to happen.” -Lucas

Eventually, Lucas had to make a difficult decision. “We had some serious concerns about wasting of funds,” he noted.

Worried that Destiny Rescue was supporting an interminable investigation, he told a police colonel, “We will fund the raid when it happens, but we are not going to continue to fund these investigations.”

Less than a month later, at 8 p.m. one evening in August, our agents got the call: “Be here tomorrow at 2 a.m.”

After eight long months of undercover work, they would join over 250 officers on a massive raid in 11 different locations spread across half the country.

Agents and officers donned bullet-proof vests as trained tactical teams prepared to secure each scene. As officers and agents received their pre-op briefings, tension and excitement grew. Upon seeing so many officers suiting up, Jacob’s excitement mixed with anxiety that news of the raid would leak.

“I was a bit doubtful because there have been cases of raid information being leaked. But the desire to finally have this case closed after so long drove me,” he said.

The enormous scale of the operation wasn’t the only factor complicating the raid. From our surveillance and the girls’ testimonies, we knew the traffickers had guns, and the 11 locations were well-connected; safety and timing were paramount to success.

The raids needed to happen simultaneously. “To not lose any girls, we had to operate at the same time,” Jacob explained. “Because it’s a network…they’re connected and we have to be connected as well.”

Even one minor misstep could give traffickers a chance to escape or warn their cohorts, and, what’s worse, take girls with them.

The teams stealthily approached each site. Eleven different incursions were happening at once all across the Dominican Republic. 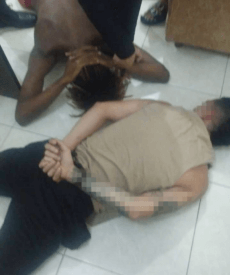 If the perps and victims were in a house, officers quietly surrounded it as they prepared to breach; in hotels, they spoke discreetly to the receptionist and made their way to the individual rooms where the girls were being kept. In an act of incredible coordination, the teams all over the country breached the bases simultaneously.

Officers broke down doors and flooded into rooms, guns raised. Destiny Rescue agents’ intel paid off: officers knew the names and faces of every perp in every location. Our reconnaissance was so specific that the police even knew the exact rooms where traffickers preferred to hang out.

They quickly identified, subdued and cuffed each trafficker without firing a single shot. One alleged perpetrator managed to escape the initial sweep, but was apprehended just two days later.

As officers arrested the traffickers, other police continued to secure the areas. What they found confirmed they’d raided the right location: condoms, drugs, weapons—and victims.

Jacob described the scene at the site he raided: “It was very quiet and sad. I was surprised that there were 22 girls in the hotel. One thing I noticed first was the depression and tension on the girls’ faces. They had been consumed by the exploitation and were hopeless. They seemed physically and emotionally weak and frustrated.”

As he began to interview the victims, Jacob was struck by their array of responses to the raid. “Some were scared, but most seemed happy when they realized they were being saved. A lot of them were shy and didn’t want to be seen,” he said. 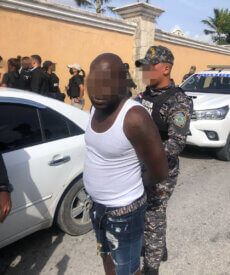 The majority of the girls and women were from Colombia, with a few from Venezuela. Most were delighted to be rescued and eager to return home to their families. However, a few had made the unfortunate transition from victim to accomplice–these few had begun managing the websites that sold the captives and had to be arrested.

The victims were taken immediately to shelters run by local ministries or nonprofits. Lucas was pleased with how well the government took care of the survivors, saying, “The Dominican Republic offered residency to anyone trafficked that wanted to stay, and the girls who wanted to return home were flown home and reunited with their families.”

In all, Operation Cattleya resulted in 14 arrests and rescued 75 girls and women from sexual exploitation.

No one left behind

Just as our agents and officers were taking a collective sigh of relief, word came in: there were two girls left.

This time, a raid was untenable because of where they were being held. After surveillance, police and agents determined that the safest way to extract the victims was via sting.

Jacob bravely went back undercover to imitate a sex buyer purchasing time with the women. He paid for both and drove a predetermined route across town. As planned, the police intercepted the vehicle and dragged our agent out of the car. To keep his cover intact, they cuffed him and roughed him up to make the ploy believable.

Those two survivors will never know that the man they saw cuffed had been working tirelessly for months to secure their rescue.

These are the types of heroes that make up Destiny Rescue: those who put their lives on the line with the knowledge that they may never be thanked or acknowledged by the ones they work to save.

Names have been changed to protect identities.

Your dollars will fight for freedom.

We value transparency and are committed to using funds in strategic ways to accomplish our mission and vision.

Destiny Rescue is a registered charity with the Australian Charities and Not-for-profits Commission (ACNC) and complies with ACNC’s governance standards, including the new External Conduct Standards. We are also a code-compliant member of the Fundraising Institute of Australia (FIA). The FIA code sets a high standard for fundraisers, ensuring all funds are collected ethically and with accountability to all stakeholders.